A place where students can work safely without fear of contracting any viral diseases since we are still asked to work in groups and finish our projects even in dire circumstances and so arose the need for a safe, sustainable co-working space. We also chose this specific site as it is an iconic location in relation to many landmarks including Al-Sultan Hassan Mosque, Al-Refaii Mosque and the Citadel and while such magnificent buildings are present there is a huge lack of any student workplaces even though these places are usually teeming with students who go on site visits, or other projects and who don’t find any near places to work and might have to commute between the workplace and the site.

Our main goal is adding value:

Having an efficient modern design without desecrating such a religious and spiritual environment. 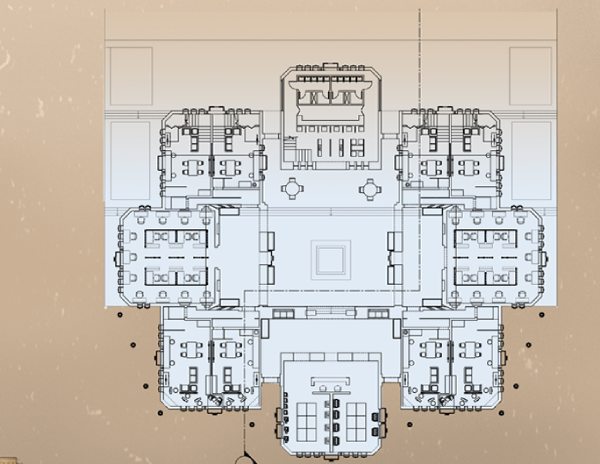 Inside the court lying in the geometrical centre of our project surrounded by all the elements and acting as a cooling feature .

Our program consists of 90m2 units that make up the entire building and divided into its different functions; cafeteria, public and private units, entrance and printing station, toilets and sanitary rooms.

3-Good Health and Well Being

We chose these sustainable development goals as the project should focus on the health and wellbeing of the users, use clean energy to protect its environment and adopt sustainable techniques. 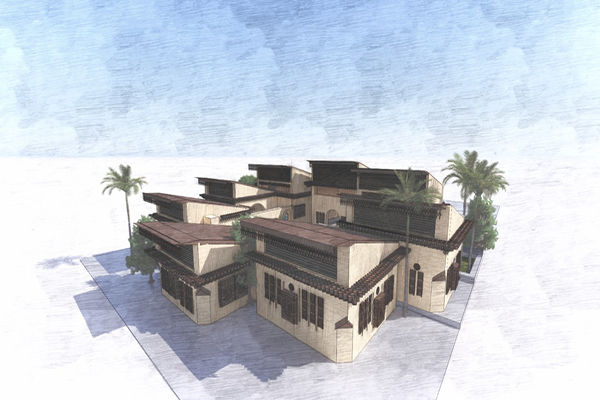 Our choice of site of course played a huge role into our precedents and inspirations where we tried to find the balance between modernity and traditional design techniques to blend in.

We took inspirations from the Islamic architecture in the form of mashrabiyat while imitating the effect of Mal’qaf or wind catcher on the roof of the unit to allow natural ventilation. The units are all oriented towards the views of the mosques.

We used the concept of the 4 Iwans as used in AL-Sultan Hassan Mosque to emphasize important spaces in the building such as the entrance, service units and special rooms. The building form comes from the shifting of each unit more than its previous one in order to provide all the spaces with views of the landmarks.

The site wasn’t the only factor that affected our design as we all know its no longer a choice for your building to conserve energy, be sustainable and employ techniques to prevent the spread of viral diseases, especially with the recent events and how Covid-19 took many lives and threatened much more not to mention how everyone had to put their daily lives on hold for fear of contracting it. 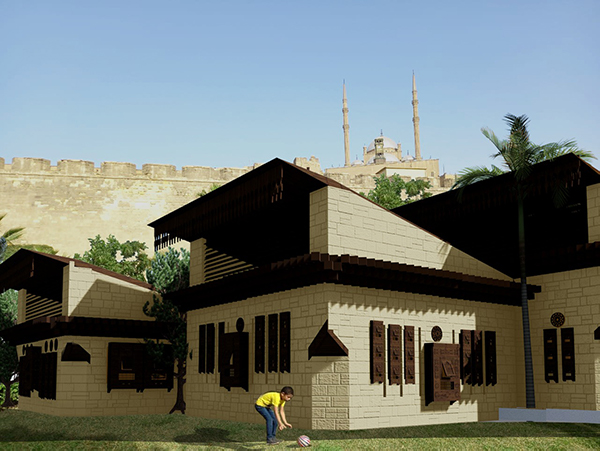 This inspired our design for the airflow inside the unit where cross ventilation wasn’t an option as it promotes the spread of viral infections, instead air is collected through the windcatcher above passing by a mesh layer containing a disinfectant and then through a divided and then pushed by the effect of air pressure to the bottom of the unit where it is then pushed outside through the space underneath each unit. In public rooms every person is in booth-like spaces separated by patterned partitions, while in private units a spacing of at least a meter and a half is maintained in most places with the mezzanine

level so people don’t all have to sit together. The louvres installed on the opening is controlled by the user to open and close to certain degrees to manage the air intake into the unit. Other solutions to conserve energy inside the unit include the allowance of natural light into the space.