Dr. Hanafy Gebaly, Speaker of Parliament, said that he visited the new administrative capital, describing it as “the most important achievements of Egypt and its dream to cross into the future.” This came during the beginning of the Parliament session on Sunday, February 14, in which the Speaker reviewed the details of his visit to the headquarters of the Parliament in the Administrative Capital. "I had the honor to visit the New Administrative Capital to find out the latest developments regarding the construction of the new building of the Council, and what I saw there is a miracle that every Egyptian should be proud of, whether it is done in the main building of the House of Representatives ... which includes the main hall that accommodates a thousand members, or the service buildings that cope pace with the latest developments of the era in terms of modernity and technology. He said: "I learned that work continues there day and night."  The speaker of the House of Representatives thanked President Abdel Fattah El-Sisi, saying, “He is the sponsor of development, who came out of the good land of Egypt in order to cross the bridge to complete the building of a modern civil state." He added: Thanks are extended to the Engineering Authority of the Armed Forces and its men, and thanks are also extended to the Arab Contractors Company, and to all companies operating there for their efforts to achieve this gigantic Egyptian edifice. For his part, 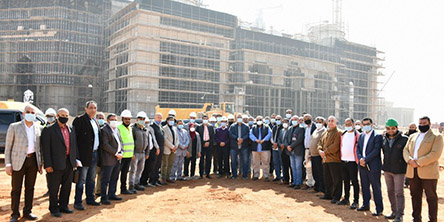 Representative Amr El-Sonbati, a member of the House of Representatives for the Heliopolis and Nasr City constituencies, affirmed that the new House of Representatives building in the Administrative Capital is an architectural "icon" that was built with Egyptian hands. As an Egyptian, before being a Member of Parliament (MP), he feels astonished and proud of the achievements made in the Administrative Capital, which confirms the strength of the Egyptian state and President El-Sisi's insistence on promoting it and putting it in the position that every Egyptian dreams of.