Dr. Mostafa Madbouly, Prime Minister, stressed the need of all governorates to benefit from the system of spatial variables in rapid and effective dealing with any structural violations, so that random phenomena do not return again. This came during the cabinet meeting via video conference. The Prime Minister began the meeting, referring to the great importance of the talks held with the Iraqi and Jordanian sides, in the presence of high-level ministerial delegations from the two countries. During the meeting, Dr. Rania Al-Mashat, Minister of International Cooperation, indicated that she had already received a number of proposed projects from the Iraqi side for implementation within the "oil for reconstruction" mechanism, noting that arrangements will be made with the concerned ministers to start the implementation procedures for these projects within the framework of joint cooperation between the two countries. 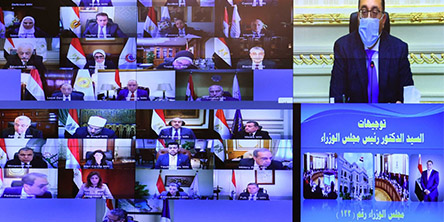 Accordingly, Dr. Mostafa Madbouly affirmed the importance of cooperation with the brothers in Iraq, and assigned Dr. Assem El Gazzar, Minister of Housing, Utilities and Urban Communities, to quickly arrange a visit to the Egyptian contracting companies to explore the projects to be implemented and Neveen Gamea, Minister of Trade and Industry, was tasked to provide all means of support for our brothers in Iraq and meet all their various demands. For his part, the Minister of Housing confirmed that the "Arab Contractors" Company - Iraq Branch has already been assigned to quickly evaluate the required projects in preparation for the agreement to start implementation.

In addition, Dr. Mustafa Madbouly touched on the importance of the system of spatial variables currently available in the military space, stressing the need for all governorates to benefit from that system in rapid and effective dealing with any construction violations, so that random phenomena do not recur again.