Located on the plateau of the Giza Necropolis, the project is nestled in the village of Nazlet El Samman. This ancient site was founded in the 7th century by desert tribes fascinated by the Pyramids; the village is a preserved site, a whole journey through time,. Restoring this village creates a bulwark against the massive tourist influx and the real estate speculations that generate tabula rasa in these historical districts. The Cheops Observatory is also an artist’s residence, a gateway at the entrance of the desert, an inhabited belvedere at a walking distance of the largest of the pyramids of the Giza plateau. 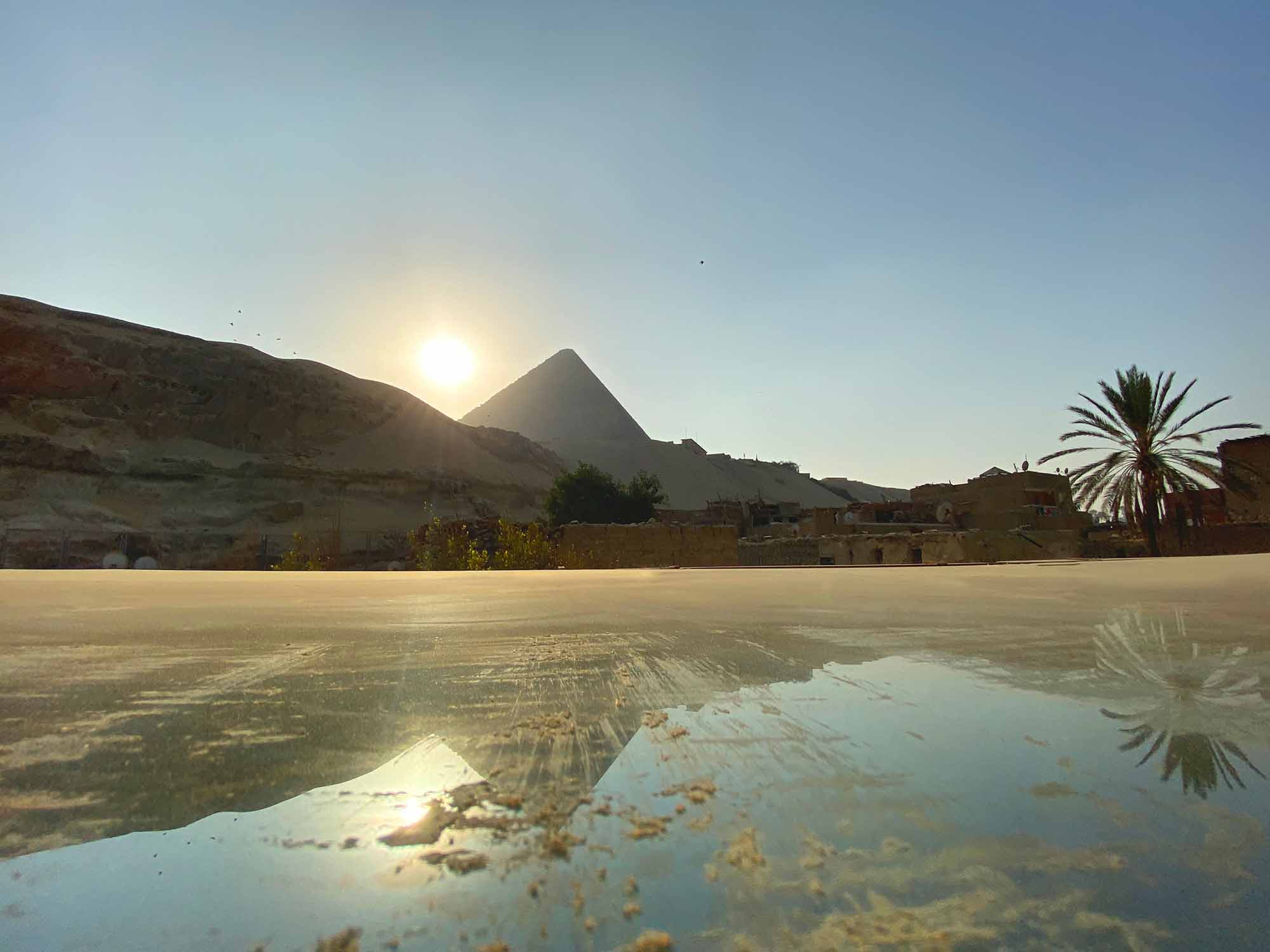 According to recent estimations, more than 60% of global construction is done nowadays without building permits, generating an architecture without architects. In Cairo, informal architecture breaks all records and stretches on 70% of the territory; It has spread mainly on agricultural land right after the 2011’s Egyptian revolution.

In this context, the agency's approach to this project was multiple; We worked on a systemic approach on Informal Architecture, on which an intervention was necessary for the safeguarding, the preservation and the extension of the historical heritage. According to centuries-old oral traditions, the residence was built orally, without any plan, just a few sketches drawn on the desert sand. Local construction techniques and ancestral savoir-faire and crafts of the villagers are an essential part of the project, with a social and environmental commitment. Materials are upcycled, diverted and reused in a short circuit; The facades are made up of an accumulation of raw earth bricks, recycled traditional windows, and shutters coming from the circular economy of the village. Part of the crowning consists of a triangular tent handcrafted by an ancestral tribe living in the Giza desert. 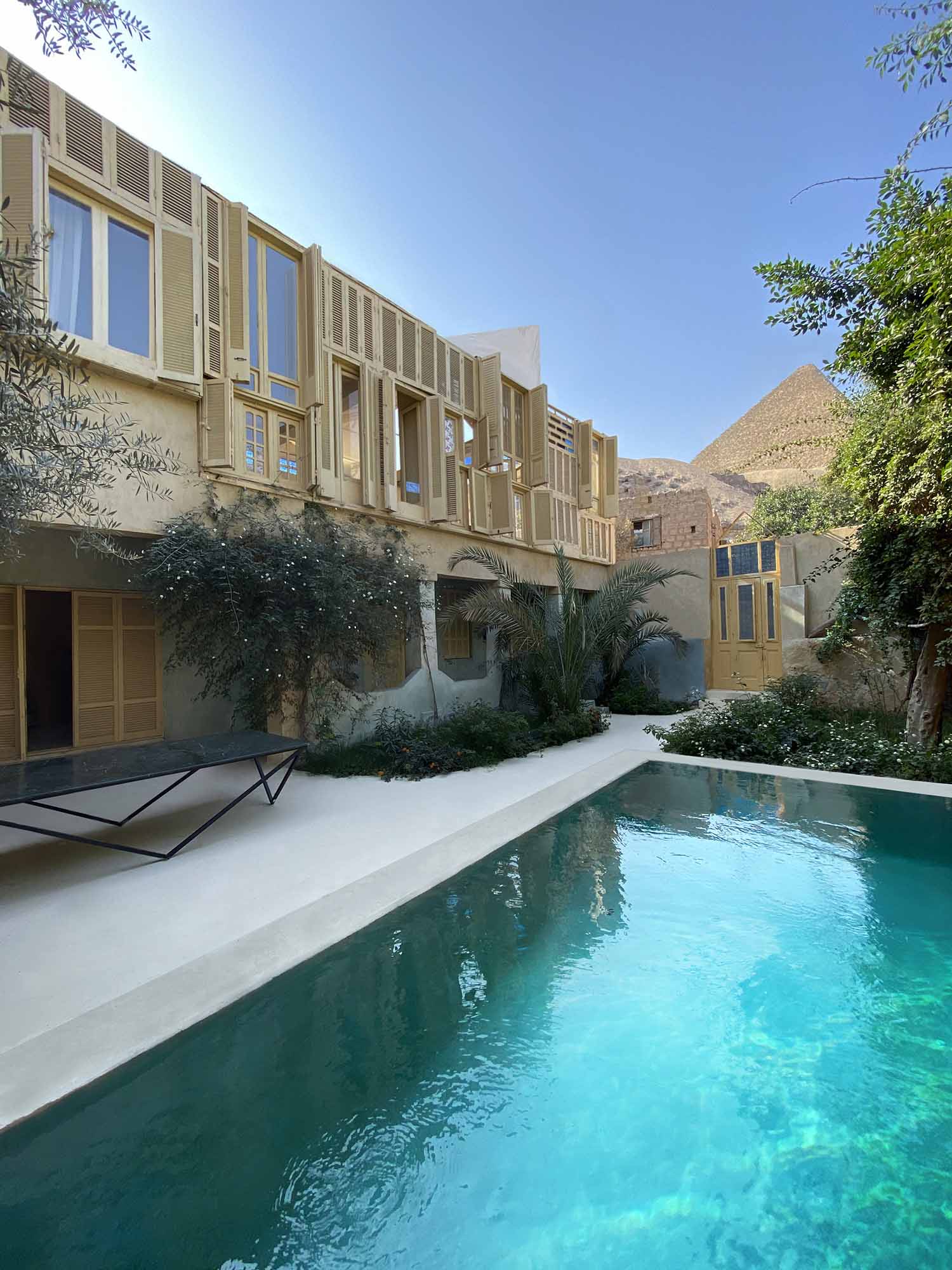 A vertical stratification inscribes this architecture in a temporal process linking the vernacular, the contemporary and the nomad in one main building. This architecture with variable geometry allows both specific or integral protection system, effective against the sun rays, as well as optimal air-cooling flow on the levels. 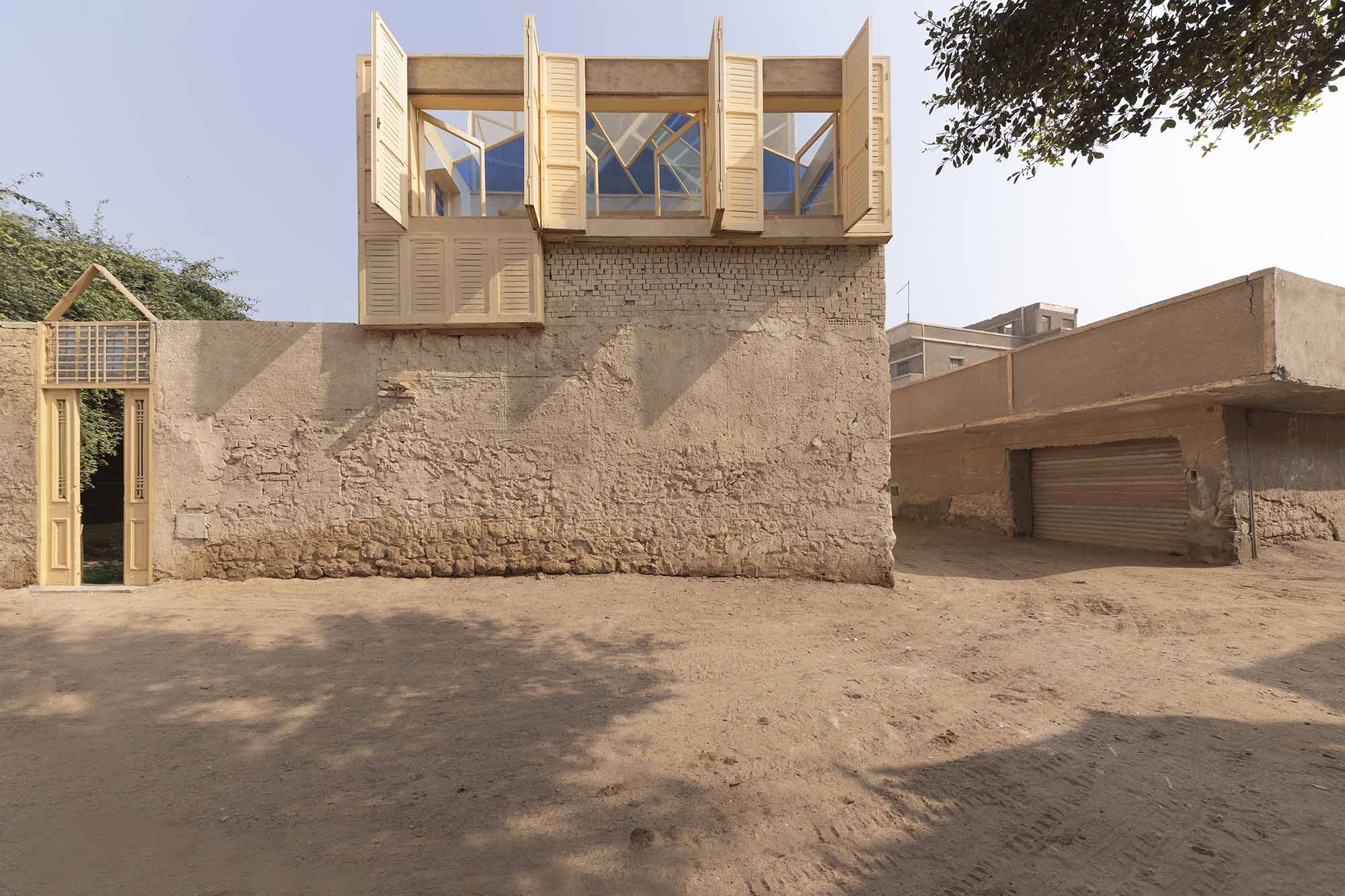 The Observatory was built in alignment with the pyramid of Khufu, the oldest, largest and only one of the 7 wonders of the ancient world still existing today.

The building has an East-West orientation, which gives it an optimal position to contemplate the trajectories of the sun and the moon in their greatest course possible. This exceptional situation allows examining the relationship of the Pyramid to the North Star, the precession of the equinoxes (change of direction of the axis of rotation of the earth) amongst others. 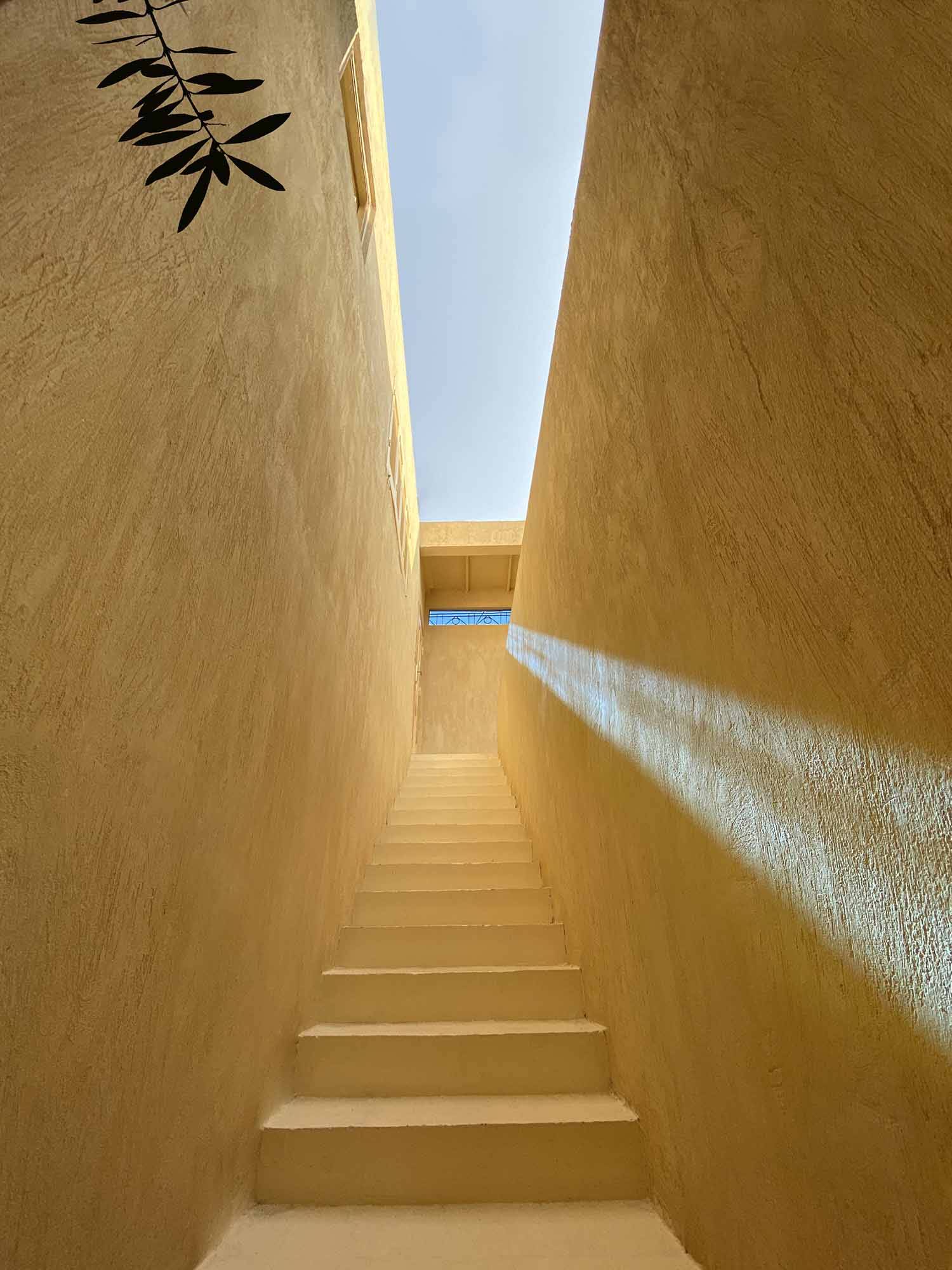 Those relations create an architectural and landscape composition with logical continuities and concordances of views while opening powerful perspectives towards the pyramid from the garden, the swimming pool, the time room and even on the reflections of the furniture.  The Time Room is a powerful meditative observation space facing the Great Pyramid of Cheops. The textile roof folds and unfolds very quickly depending on the season, creating an open, covered or uncovered room. A specific wooden framework with pyramidal truss and radiating lines has been designed in a new typology, allowing to double the height under the ceiling. This triangular shape creates an aspiration, a three-dimensional portal, in a greater than life anamorphosis that frames the great pyramid of Giza. In addition, a horizontal canopy was installed towards the West façade and the sunset, creating a second irradiated anamorphosis of the great pyramid of Khufu which is revealed in the center of the Time Room.

Connected to the elements, this architecture opens out without artifices, bays, glazing or other dividers to be in a vivid relationship with its environment, generating a hyper contextual space, sensory and porous. 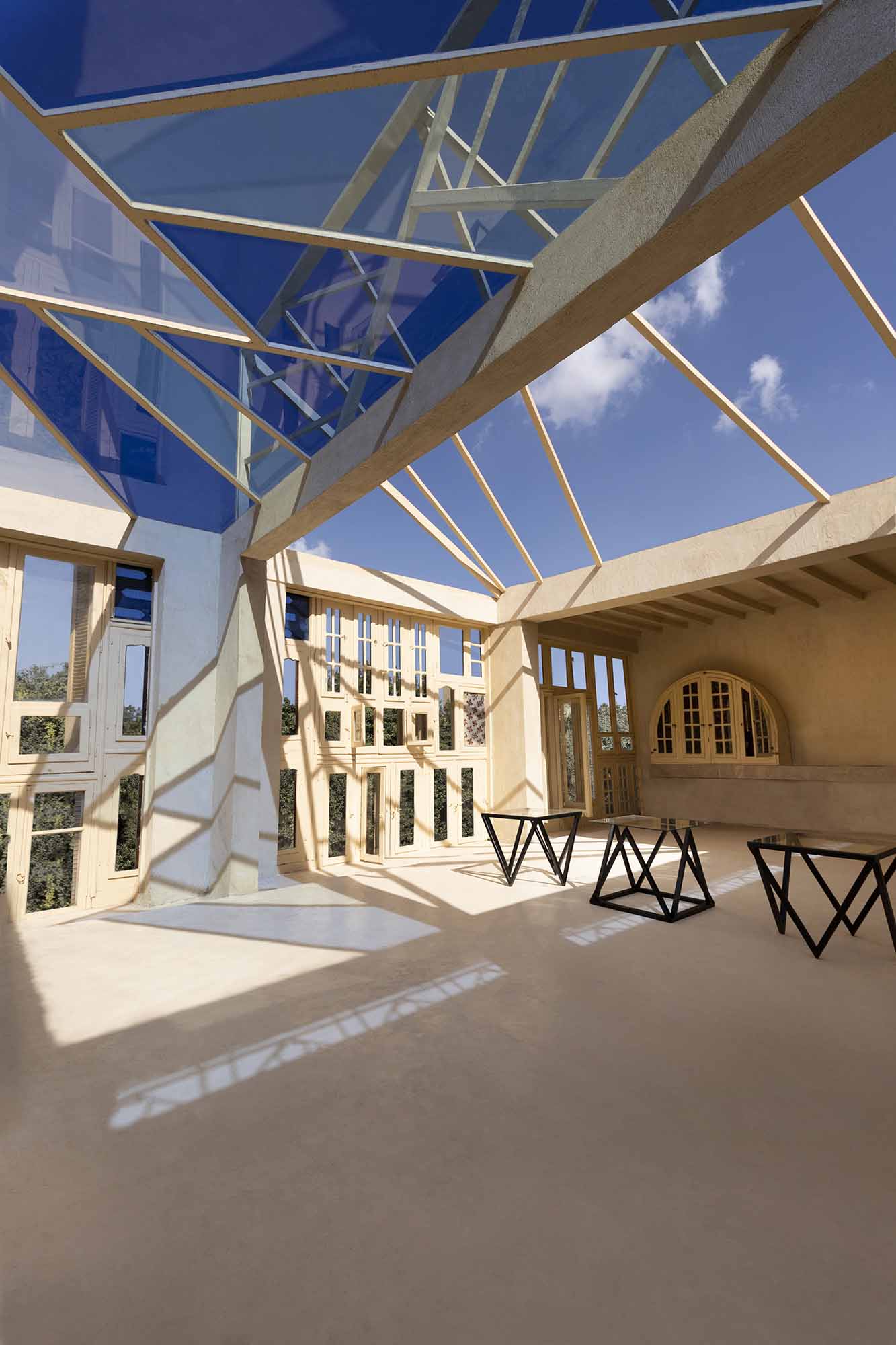 The Cheops Observatory is both open and closed, nomad and sedentary, erectile and material construction. Back to the basics of Architecture, the Observatory creates a dialogue between local vernacular architecture and an architectural ready-made, an answer to the necessary mutation of informal architecture, one of the fundamental issues of 21st-century ecology. 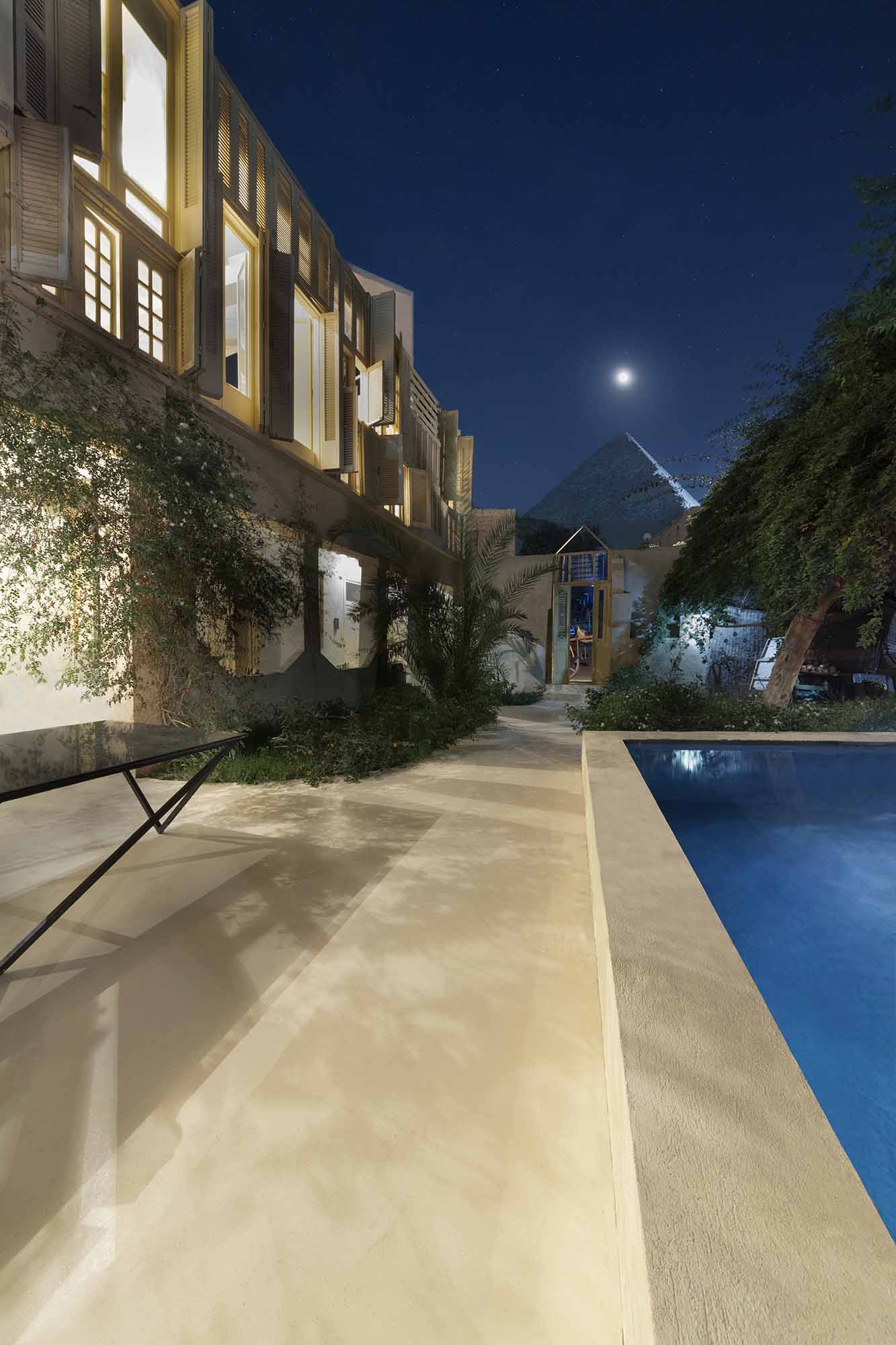